It’s been 6 years since I last wrote about The Quakes, back when I covered their only Southern California appearance in 2010 supporting the release of their 2009 album Negative Charge (Orrexx Records). I was blown away by that show at The Music Box and have been a fan ever since. Perhaps it’s because I admire the way the trio works so well together on stage to always put on an amazing show that demonstrates their skill, energy, and commitment: I’ll never forget Juan Carlos breaking his snare at last year’s Psychobilly Meeting in Spain because he was playing so passionately, or talking to Steve Whitehouse about how bassist Wes Hinshaw uses strings that only the most talented and technically proficient musicians can play, and how he does so impeccably. Or perhaps it’s because I’m a product of the ‘80s and love the new wave influence in so many of their songs and covers like “The Killing Moon” and “Send Me An Angel.” Or perhaps it’s because I love that lyrics range from witty critiques of poseurs and scene-sters, to songs about love and heartbreak, to messages about being different, being a rebel, and not fitting in; I appreciate the variety of topics that singer-guitarist Paul Roman writes about, defying genre clichés and easy categorization. In fact, it is because their sound defies genre expectations that has prompted some people to suggest that they are “too psychobilly for the rockabillies, and too rockabilly for the psychobillies.” Who cares? What I care about is that I know I’ll always enjoy a Quakes performance, the tunes are melodically catchy and musically creative, and I can relate to their song lyrics because they aren’t always about zombies in a graveyard (nothing against songs about zombies, but variety is the spice of life). 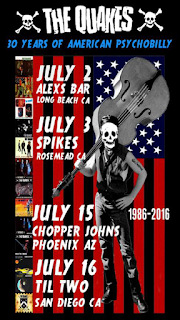 This summer marks the 30 year anniversary of The Quakes, with shows on July 2nd at Alex’s Bar in Long Beach, July 3rd at Spikes in Rosemead, July 15th at Chopper John’s in Phoenix, and July 16th at Til Two in San Diego. Over the years, they’ve crafted a unique sound and style that stems from their diverse influences. When Paul Roman’s older siblings left home, he inherited their collection of British Invasion vinyl. Around 1979 he began listening to punk and new wave, and soon after that discovered The Kingbees, a band who was reviving bluesy rockabilly with a new wave pop twist a year or two before Stray Cats mainstreamed neo-rockabilly in the U.S. (just watch this video for “My Mistake” released by The Kingbees in 1980). It wasn’t until the success of Stray Cats, Rockats, and The Polecats on MTV in the early 1980s that he first heard the term “rockabilly” and knew what to call the music he loved: “After that, it was searching for records and reading and trying to find out anything I could about it. There was none on the radio apart from occasionally hearing Gene Vincent, Bill Haley, Elvis, etc. on the oldies station on AM. There were certainly no shows. No one had ever heard of that music. It was very confusing because Stray Cats had the number one album in the country yet I seemed to be the only one who liked it!”

Paul became aware of psychobilly while in London in 1985. That’s when Paul started to try his own hand at producing something cutting edge in Buffalo, New York, first as The Quiffs, and then in 1986 as The Quakes with Dave Hoy on drums and Rob Peltier on bass. Pre-dating the growth of psychobilly stateside, they became frustrated with the lack of appreciation or understanding from local audiences and their inability to score gigs as an underage modern-sounding neo-rockabilly band: “It’s very hard to explain to people now but there was no scene then. ZERO. No one that came to see us looked like us or knew what we were doing.” They had to find creative places to perform - parties, busking, open mics, and – most importantly in terms of the evolution of their sound – at new wave and punk clubs, like The Continental in Buffalo: “That is when/why we started covering those type of songs and making them our own. It got the attention of the people in the clubs who at first glance would write us off as the Stray Cats. We changed our sound gradually and found that we got more attention playing fast and aggressive.” A trip to England in 1987, where the psychobilly scene originated, made the most sense in order to find a more appreciative and engaged audience, and a contract with Roy Williams’ Nervous Records soon followed. The rest is history, which you can read all about here on their website.

In advance of the band’s 30th anniversary, I interviewed Paul Roman about his musical influences, the balance between commercial success and artistic freedom, his thoughts on how the –billy scene has changed and evolved over the past 30 years, the state of the current music industry, and what being part of one of the most influential rockabilly/psychobilly bands means to him.

Who are some of the musicians who have most influenced your guitar style?
I was self-taught because I didn’t think there would be a teacher who could teach me rockabilly. I should have taken lessons so that I could learn the fundamentals. It would have made things a lot easier. I started to try and copy riffs from old rockabilly records like Johnny Burnette trio stuff, slowing down records and trying to learn by ear. One of the first solos I learned was from “Party Doll” by Buddy Knox.

What’s your preferred guitar set-up? What effects do you use?
I still use the same guitar I have always used, since I bought it in May of 1984. [Paul still has the receipt from the purchase!] It’s a Gretsch 6120 Nashville made in 1963. I like a sound that’s clean with a little bit of edge to it, a little snarl ☺

I love that marimba sound on "Tearing Up My World." Did you play that? Is it an acoustic marimba or a keyboard sound? It works so well on that song!
It was a keyboard. I was probably thinking of “Love My Way” by The Psychedelic Furs, “Collapsing New People” by Fad Gadget, “Gone Daddy Gone” by Violent Femmes, etc. No rules - something different! Who says I can’t put a marimba on my album? ☺

Speaking of diverse influences like marimba, I’ve talked to several members of the first wave English psychobilly bands who said that the music was influenced by all sorts of genres at the beginning - ska, punk, mod, new wave, northern soul, you name it. Many of them felt that some of today’s bands have lost a touch of that diversity and variety that really made psychobilly unique and interesting when it started. What’s your opinion?
That is true. Bands that are trying too hard to be a certain way, whether it’s “old school” or whatever, are missing the boat completely. We never wanted to be the king of the subgenre. We wanted our music to appeal to people in the scene and other people outside the scene. There are a lot of different bands that all fit under the psychobilly tent.

On that note, I’ve interpreted “Nothing to Say” from Psyops as a critique of contemporary psychobilly bands who only reproduce genre clichés like writing about monsters to follow the formula of some of the most successful bands. Do you ever get any comments about that song from fans?
No, not really. In that song I meant it more as “nothing to say” musically and not so much lyrically, although that too ☺ It’s so easy to write “for the scene” - I know what they like, I know what they want, I know what attracted me to this music. But “en ole apinaa si” (“I’m not your monkey” in Finnish). This is my art, not commerce. How easy would it be to draw a skeleton playing a bass with a quiff and flames at the bottom as a t-shirt design? Too easy, cheap applause, like standing on the bass and other circus routines during the show. Besides, being famous in a small subgenre of a subgenre = nowheresville. Stay in school kids ☺

What does being involved in this music mean to you?
At this point I feel a sense of pride that although we didn’t become “rock stars” we had some influence on the scene and some of my songs have real meaning for people.
What do you like about making and listening to this type of music, or being part of this scene?
It’s who I am. I would not call it a “lifestyle” though. It’s about the music. We just got back from the Psychobilly Meeting in Spain and it’s great to see all the guys in the bands. We have been playing with bands like The Coffin Nails, DAG, Frenzy, etc for 30 years. There is a great comradery between most of the bands.

I read that you run a business that restores 20th century modern furniture. Do you still do that?
Yes, I have always had a job of some sort. I can see it from both sides: on one side, we were not successful enough to make a living out of The Quakes, and on the other hand, that has given me the freedom to do whatever I want [artistically]. I know some people who make their artistic decisions based on whether or not they will be able to pay the mortgage. For example, if I had a big hit song with the marimba in it, I might think, “Hmmm, that’s what my fans like. I better come up with some more songs with a marimba and keep this gravy train rolling.” ☺

Any final thoughts?
I know that it doesn’t pay my rent and it doesn’t mean a whole lot in the grand scheme of things, but we were the first American psychobilly band (psychobilly as we know it today - not The Cramps). The Quakes started in 1986. Before that we were The Quiffs. We already had some of the songs that ended up on the first Quakes album before the band started; songs like “You’re Dead,” “Psycho Attack,” “Where Did It Go,” “1000 Cats” were some left-overs from The Quiffs. We were always wondering if there were any other bands like us in the USA at the time. Occasionally Roy Williams at Nervous would get a demo tape from an American band and it was always just rockabilly kind of stuff. He would then let us take the cassettes to record over as we were living in London with hardly any money. The fact is there wasn’t anyone else. We were playing at the Klubfoot before any of the West Coast bands even started.

All the very best, and thanks again so very much!
Thank you - you are the scene ☺