I’ve been casually tuning in to the Olympics here and there, and since I write a lot about the psychobilly obsession with zombies, I kept thinking about how important some of these skills are for fending off the undead. So in case you’re worried about suffering a four-year withdrawal from the Summer Olympics, maybe it’s time to start a separate competition: The Surviving the Zombie Apocalypse Olympics (The SZAOs). 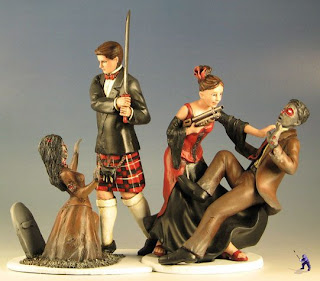 Just look at this athletic couple poised atop the wedding cake. I can imagine these fit individuals in the fencing and shooting trials. And I would have liked to see them trotting around as an example of the “Industrial Age” in Danny Boyle’s Opening Ceremonies. After all, Boyle directed 28 Days Later, provoking the “are those things zombies or rabid humans” debate, so he knows a little bit about the subject. I have no idea why he didn’t incorporate some scenes from Pride and Prejudice and Zombies. The Queen might have been amused by watching Elizabethan ladies running around the field gouging their fencing swords into rotting corpse dummies.
CLICK HERE TO READ ON...
Posted by Kim Kattari at 11:43 AM