Big Sandy and His Fly-Rite Boys: a summer tour from CA to TX and back again 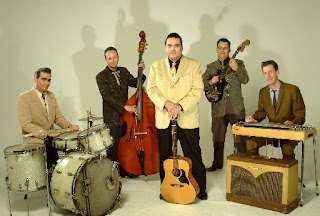 Big Sandy and His Fly-Rite Boys will be taking Texas by storm this weekend, with gigs lined up in Houston (Friday, July 20th at the Continental Club Houston), Austin (Saturday, July 21st at the Continental Club), and San Antonio (Sunday, July 22nd at Sam's Burger Joint), before they head back home to California.
Back in '90s, before I knew that I would wind up as an ethnomusicologist, I loved seeing Big Sandy play with his band at Linda's Doll Hut in Anaheim... and I was always fascinated. At the time, I didn't really know much about the retro scene, the vintage lifestyle, or roots rockabilly music, but I totally dug what Big Sandy and his amazing band were doing. Flash forward ten years, and I've earned a doctorate by researching and writing about this scene, so I have to thank Big Sandy for sparking that interest in me in the first place. I got a chance to catch up with him for an interview before the group played a vintage car show festival in Monterey awhile back...
SO CLICK HERE FOR THE FULL STORY ON EXAMINER.COM
Posted by Kim Kattari at 2:04 PM 1 comment:

The dirty-mouthed mistress of the classic blues era: Lucille Bogan

Suddenly my friends and I are sharing inside jokes like "Hey, isn’t yours as big as a baseball bat?" or "Will it make a dead man come?" or "You’ll get fat as a pig from suckin’." It’s all the result of one hot Texas night sitting on the porch listening to Lucille Bogan’s blues songs. The recordings date back to 1920s-1930s and boy did Lucy have a dirty mouth that could compete with even the raunchiest lyricists today. 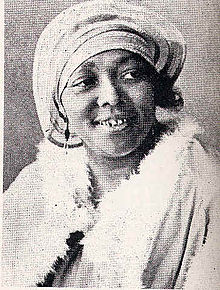 Ernest Borneman lists Lucille Bogan as one of the best three female blues singers of all time, in the company of two I’m sure you already can guess: Ma Rainey and Bessie Smith. But how have I not heard of Lucy until now? Speaking of that, I hadn’t heard of Borneman before either, but I hope my obituary lists half the cool stuff he did. He was an ethnomusicologist, anthropologist, and jazz musician, as well as a crime fiction writer, filmmaker, and sexologist, among other things. His academic work basically revolved around music and sex. How awesome is that? As a Communist, he had to flee Germany when the Nazis rose to power, so he escaped by posing as a member of the Hitler Youth leaving the country as an exchange student. He committed suicide when he was 80, heartbroken over a love affair gone awry.

Back to Lucy, and music about sex. When she recorded "Pawn Shop Blues" in Atlanta, GA in 1923, she became the first black blues singers to be recorded outside of New York or Chicago. Listening to her lyrics, it's pretty clear that she spent a lot of time in juke joints and red light districts, and she wrote songs that described the risqué activities practiced therein, with most of her lyrics overtly oriented towards drinking or sex, or both. We're not talking about thinly veiled sexual entendres. These are clear as day.

CLICK HERE to read the rest of the article and enjoy Lucy's dirty lyrics here on my Examiner site.
Posted by Kim Kattari at 11:38 AM No comments: