Austin has been known for years as the “live music capital.” But only recently has it started to take precedence as one of THE places to be if you’re interested in 1950s vintage culture. This is partly due to the efforts of the Rockabilly Revival Fest, which has been catering to the rockabilly crowd, and introducing newcomers to its midst, for five years now.
One sign that the crowd and demand is growing was the addition of another stage this year. A stage sponsored by Gretsch featured homegrown Texas bands and also ensured that music was going practically non-stop from 3 pm to past midnight. On the main stage, top acts were billed, from Reverend Horton Heat, to Nekromantix, to Lee Rocker of The Stray Cats fame. In short, Revival Fest offers a heck of a lot of big-name acts for a slim fee, and is opening up Austin even more to be a top contender in the rockabilly/psychobilly scene. 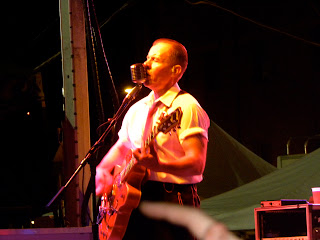 View slideshow: 5th Annual Rockabilly Revival Festival
There were just too many acts this year to describe every one, but here are some highlights of this year's festival:
CLICK HERE TO CONTINUE READING ON EXAMINER.COM
Posted by Kim Kattari at 7:32 AM