The 5th Annual Revival Fest (featuring several California rockabilly and psychobilly favorites) will take place this Saturday, May 26th, in downtown Austin at 7th and Trinity. I’ve been a fan of this festival for years, which at its inception was associated with Orlando Rios’ Rockabilly Magazine. It’s grown into a highly-anticipated annual event that attracts fans and bands from all over the world, garners support from major sponsors such as Pabst Blue Ribbon, Gretsch Guitar, and Sailor Jerry Rum, and has even prompted the mayor of Austin to designate an official “Rockabilly Revival Day.” 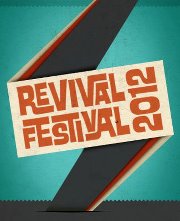 CLICK HERE FOR AN INTERVIEW WITH THE FESTIVAL'S CO-FOUNDER, THE SCHEDULE, and WHY I LOVE EVERY BAND PLAYING THIS YEAR - AND YOU SHOULD TOO!
Posted by Kim Kattari at 11:39 PM