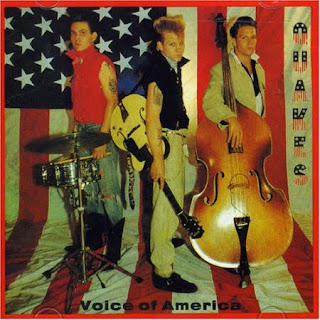 The Quakes are considered to be one of the first American psychobilly bands, having formed in New York in 1986. They first played modern rockabilly with a new wave twist à la Stray Cats and The Polecats, but soon added a faster and harder edge to their music and fashion style to cater to the Buffalo punk scene. Of course, there wasn’t much of a psychobilly scene here in the States in the late 1980s so they tried their luck in London, eventually landing a gig at the legendary psychobilly venue The Klubfoot and signing with Nervous Records.

The history of line-up changes and trips back and forth across the Atlantic will make your head spin, so let’s just say that this Friday you have your chance to catch The Quakes in their current line-up: Paul Roman is the original guitarist and vocalist who has remained with the band throughout its 24 years; Kenny Hill on bass was added in 2007; and drummer Juan Carlos has been with the band since 2008. If you want the complete history, click here.

Friday’s show in Hollywood will be the only SoCal appearance for the band this year as they support their seventh studio album Negative Charge (Orrexx Records).

CLICK HERE TO CONTINUE READING THE ARTICLE
Posted by Kim Kattari at 4:39 PM