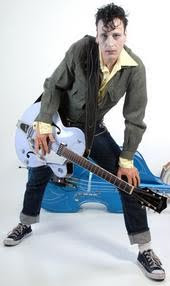 I was so impressed with the Cold Blue Rebels album “Blood, Guts & Rock n Roll,” I had to ask guitarist Joe Normal some questions about the band’s influences, shows, and of course zombies.

How do you describe your sound to someone who’s never heard you before?
Blood, Guts, n Rock & Roll!

Which song do you think best represents your sound?
Probably “Worm Hole Hooker.” It shows we can embrace the genre and has some good guitar solos. Also, the tongue in cheek lyrics are pretty classic!

Which song is most meaningful to you?
I’m partial to “Big Boss Man” because of the musicality of the arrangement. It goes beyond the conventional psychobilly song and offers the listener something we all relate to: wanting it ALL in life!

Which song on your most recent album are you the happiest with how it turned out?
All the songs are exact representations of what you get when you come to see us live. We actually captured the energy in our performances, so I'd have to say I am equally happy with them all.

What’s your favorite artist to cover, and why?
Johnny Cash... because he’s the MAN! We prefer to cover some of the older rockabilly dudes, but are considering covering “Tie Your Mother Down” by Queen because it rocks and nobody else has thought to do a Queen cover yet.

What’s the craziest thing you’ve ever seen happen at a show?
During “Worm Hole Hooker” our singer Mickey took one of the rebel dancers into the coffin and made it look like he ate her p*$$y, then spit out blood after! That was quite funny!

CLICK HERE FOR MORE OF THE INTERVIEW!
Posted by Kim Kattari at 8:14 PM