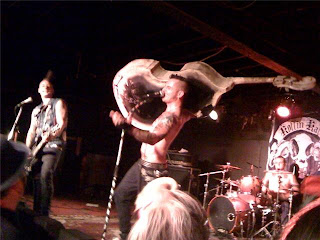 I got a chance to catch up with Koffin Kats back in October 2009 when they had just released Forever For Hire (click here to buy it). In this part of the interview, they talk about touring and performing. If you missed PART 1 of this interview, click here. FYI: Tommy Koffin (guitar) has since left the band for health reasons, but they're excited about their new guitarist, Ian.

Kim: Koffin Kats are known for non-stop touring. What keeps you going?
Vic: I love being on the road. You love seeing your family and friends at home, but when you tour like we do, you start to feel restless once you’ve been home a month or two. It’s like when it’s time to write a new CD, you feel restless thinking that people are starting to forget about you. You have to keep up the momentum. That’s why people know who we are. It’s because we keep shoving it in people’s faces. Just doing it.

Kim: How about the jobs you have at home, and how does that work out with touring?
Vic: We’re very, very fortunate. The reason why this band exists as it is now is because of our jobs. Tommy and I are carpet cleaners and Eric is a cook for a guy he’s worked for since high school.
E-Ball: They’re really good to us. It gives us a lot of flexibility.
Vic: When we’re working there, we’re like the scrapers. The jobs that no one else wants to do, they’ll kick our way and we do them.
Tommy: Like cleaning a strip club at like 3 in the morning.
Vic: Oh yeah (laughing). Fortunately the carpet was black so you couldn’t see too much!

Kim: What would you say is the most important aspect of performing? What do you get out of it? What do you like about it?
Tommy: Beer (he laughs)
Vic: I think the most important thing is giving the people a good show. You go to work all day, and you make money, then you pay this band to go watch them for your entertainment, but when you watch them just stand still, it’s like ‘Oh man, I could have just gone to a bar.’
Tommy: If we’re not into it, they’re not going to get into it.

Kim: Has the size of your audience fluctuated a lot?
Vic: Yeah, we’ve had from just jelly bean size to thousands. It’s cool because we’ve had the opportunity to play at festivals to big crowds. But our saying is ‘2 people, 200 people, we’re going to put on a show.’

CLICK HERE TO READ THE REST OF THIS INTERVIEW!
Posted by Kim Kattari at 6:40 PM