Koffin Kats interview, part 1: the band talks about the inspiration behind their music and lyrics 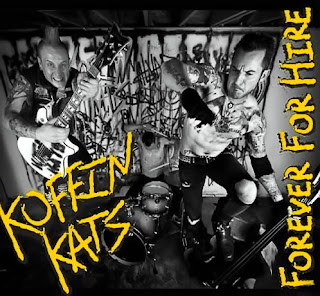 I got a chance to interview the members of Koffin Kats in October 2009, just as they released their latest album, Forever For Hire. In this first part of the interview, the members of Koffin Kats  talk about the influences behind their musical style and lyrics. FYI: Tommy Koffin (guitar) has since left the band for health reasons, but they're excited about their new guitarist, Ian. Check them out on tour NOW!!

Kim: Forever For Hire is your 5th album, and you’ve just switched to the Stomp record label (that The Creepshow is also on). How was the recording and the production?
Vic: It’s bigger than any of the previous albums, and Stomp is a very professional label. We’re happy with it, and the album sounds like us.

Kim: How would you describe this album as being different from the others?
Vic: You don’t ever want to write the same album twice. Some bands do that and they just burn out with their fans. You want to keep people interested, asking what the band is going to do next. What’s the next album going to sound like? This one sounds like us, but we made something new.

Kim: Do you describe your sound as psychobilly?
Vic: Oh yeah. When people who are not so educated in the sub-genres of rock and roll ask us what type of band we are, we tell them it’s punk. That way, if they go to our show they’ll at least know what to expect. But for the more educated people, we’re a punk band with some psychobilly flavor to it. We’ve got the upright bass, but we don’t use it as a gimmick. We won’t overdo the upright or make it the only thing you hear.

Kim: How’d you all meet each other?
Vic: We all grew up, like, literally, within 15 minutes of each other, near Detroit. Eric (E-Ball) and I went to high school together. And I knew Tommy from this little punk rock coffeeshop club called Pharaoh’s. It’s the place where you’d play your first show once you had put together a little band with your friends. Eric and I had pretty much been in each other’s bands all through school, so we started playing at Pharaoh’s and then we met Tommy’s band. They were this group of drunk kids. They could barely get up on stage because they were so hammered.
Tommy, laughing: One time I think I passed out on stage.

Kim: What are some of your musical influences?
Vic: There’s no punk band that can deny that they listen to the Misfits, but The Misfits aren’t the band that made us want to do Koffin Kats. It’s just one of the bands we like. Bad Religion is one of my favorite bands. If anything, I probably had more influence of wanting to be in a band from listening to Bad Religion. We’re also influenced by Nekromantix, The Quakes, Demented Are Go, and Mad Sin – psychobilly bands that actually have a persona about them.

CLICK HERE TO REST THE REST OF THIS INTERVIEW!!!
Posted by Kim Kattari at 6:43 PM