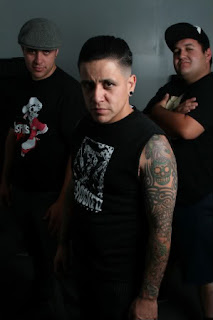 Now this is a psychobilly band that can really carry a tune. I got a chance to check out Gamblers Mark on January 23rd at The Surf City Saloon and January 24th at the “Veteranos del Underground” music festival at Self-Help Graphics in East Los Angeles.

Lead singer/guitarist Dave Gambler has one of the best voices I’ve heard in the billy scene in a long time – great tone and sustain with a crooner style that doesn’t overdo the vibrato. His brother Danny Exito (on upright bass) and Ricky Lobo (on drums) add sweet-sounding back-up harmonies that fully round out the awesome vocal skills of this band. Listen to “Rockahula FiveO” or “Down a Highway” for great examples of their clean, crisp, tuneful melodies and harmonies. Plus, there’s an honorary fourth member: Dave’s son, Jacob Dean (aka “Jake the Ripper”) earned his nickname by showing off his shredding skills at the Veteranos show while his dad threw merchandise to the screaming crowd.

Then there’s their unclassifiable mix of music genres – a little rockabilly here, a little psychobilly there, and a dash each of punk rock, ska, and surf music. Their influences range widely across the musical spectrum. Take, for instance, the first two concerts that Danny ever went to see - Dick Dale and Reverend Horton Heat - or the fact that they listened to early Jamaican ska on the way to the show. And sometimes Dave gets ready for a show by listening to industrial goth music, or surf, or 1940s jazz, or Spanish rockabilly, depending on his mood. Then Ricky brings more punk rock to the equation, which adds an extra edge to the basic rockabilly drum pattern. Put together, you get a band that can cater to any crowd.


Click here to read the rest of the review on the Examiner website!
Posted by Kim Kattari at 7:33 PM