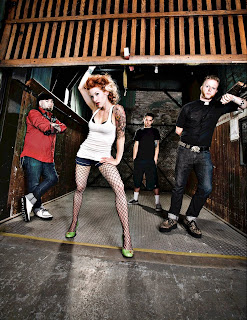 Ghouls, demon lovers, zombies, the devil – just some of the characters found in the horrifically fun songs of The Creepshow. The group boasts four talented musicians: the cute but tough bombshell Sarah “Sin” Blackwood rocks on guitar and lead vocals, Sean “Sick Boy” McNab slaps away on a stand-up bass topped with a skull, Kristian “The Reverend McGinty” Rowles delivers dark-sounding sermons and creepy organ sounds à la J.S. Bach’s Toccata and Fugue, and Matt “Pomade” Gee keeps it all together with solid rhythms on drums.

To get the hard-driving hybrid sound that makes this Canadian band unique and exciting, take a little Johnny Cash, mix in some Dead Kennedys and the Damned, throw in the zombie love child of Wanda Jackson and Elvis Presley, and add a dash each of skate punk, haunted house organ, 1980s goth, and 1950s/1960s vocal group harmonies. So whether you want to call it “horrorbilly,” “psychobilly,” “horror punk,” “punk-a-billy,” “hellbilly” or whatever other term people have come up with to describe the general “rockabilly meets punk meets horror movie” style, the band prefers to simply call it “Rock n Roll.”

The Creepshow celebrated the release of their second album, Run For Your Life, with a very successful non-stop North American tour last fall. Now they’re back with a winter tour before heading off to Australia for the Soundwave Festival later this month and then Japan for Punkspring in April. If you haven’t seen The Creepshow hit the stage before, then you’re in for a wonderful treat. They are one of those rare bands that sounds just as great live as they do on their well-produced album, and totally entertaining to boot. There are so many different musical influences that go into their sound, it’s best to just go get a taste of it for yourself. You’re bound to find something you like in their eclectic mix of styles.

CLICK HERE TO CONTINUE READING ABOUT THE CREEPSHOW AND THEIR UPCOMING SHOW WITH MISS DERRINGER AT THE TROUBADOUR
Posted by Kim Kattari at 1:21 AM