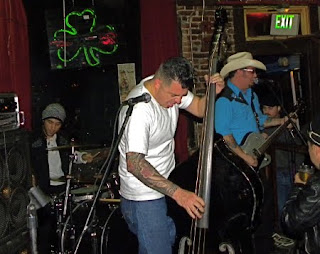 Fast cars, fast women, whiskey, cocaine and Texas. That’s what Hotrod Hillbillies are all about. I tried to find a few songs about other topics, but other than a tune about a comfortable couch, most of their songs really do fit into those 5 categories.

The band originally hails from Austin, Texas, but the current touring line-up features two of So Cal’s very own - Tony Slash on upright bass (from The Rocketz) and David Cisneros on drums (from Badluck Bandits) – alongside lead singer/guitarist Xavier Ortiz. Putting these three together makes one hell of a band. I checked out this new line-up at the Old Town Pub in Pasadena last Friday, January 22, 2010.

Like other psychobilly groups, Hotrod Hillbillies definitely has fair doses of punk and rockabilly. But what makes them different is that there’s a good deal more alt-country/cowpunk, as you’d expect from a Texas-based band. So you can wreck for a few songs, but go ahead and indulge in some good old-fashioned two-stepping during the more country-flavored tunes. (If you don’t know how to two-step, find me at the next show!)

Accordingly, instead of the macabre cemetery-obsessed lyrics of a lot of the darker psychobilly bands, Hotrod Hillbillies will have you shuffling your way through rednecky, hillbilly topics that make you want to drink enough beer (or whiskey) to forget about your ex. Check out these song titles off their 2005 album Under the Texas Sky: ‘Let’s Alcholass,” ‘Spaghetti Western,’ ‘Redneck Girl,’ and ‘Pissed and Depressed.’

CLICK HERE TO READ THE REST OF THE REVIEW on the Examiner.com site
Posted by Kim Kattari at 11:21 PM