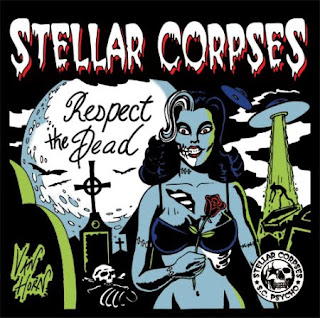 Read the review of the show here.

Be sure to check out their upcoming LA show with Frantic Flintstones at the Valentines Ball at the Fox Theater in Pomona (click here for more info).


KK: How’d you come up with the name Stellar Corpses?
Dusty: It’s an astronomy term. It means dead stars. Dead stars can literally mean stars dying like supernovas and black holes. But there are also dead stars like Elvis Presley, whose birthday it was yesterday. [Elvis would have celebrated his 75th birthday on January 8.]
Emilio: There are a lot of dead people that we like and love and look up to.

KK: Who are some of the dead stars that you influenced you?
Dusty: Vampira, she died recently. She’s one, for sure. And I’ve been a fan of Elvis my whole life. I think that he’s very charismatic and really a good showman. He had a great voice and really pushed the envelope for his era.

KK: How come horror is a big part of your band’s image and theme?
Emilio: Many reasons. One reason is that people are afraid of it.
Dusty: It’s about the things that people are afraid to look at in themselves. I find that most people that are afraid of horror and think that it’s bad are people that just don’t really like to admit that evil and darkness are part of everybody.
Emilio: I think horror is a lot of fun, too. It’s not a real serious thing. Like when you go to see a horror movie, it’s not a movie where you want everyone to be quiet in the audience. I really like in a horror movie when the crowd yells and cheers and reacts to what’s going on. I think it’s kind of like a rollercoaster too. It takes you close to death and danger, but you’re totally safe. Nothing will ever happen to, but it definitely feels like something can. And at the same time, horror movies make you not take your life for granted. Because your life would be way worse if you’re being chased by some murderer with a weapon, or you’re being hunted.
Dusty: I think horror is the mirror of what’s going on in mainstream culture. And there’s all this death on tv and people say they’re not into death and horror yet they sit there watching the news about who died, who got blown up, who got raped, who killed who, who did all this stuff, and then they tell us that we can’t do your art like that because that’s bad. But it has to come out some way. You can’t get fed all these images and then just stuff it.

CLICK HERE TO READ THE REST OF THE INTERVIEW ON MY EXAMINER SITE
Posted by Kim Kattari at 8:00 AM