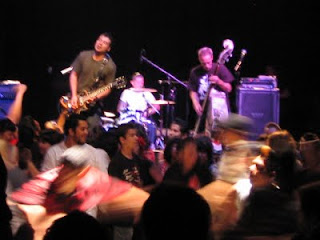 Elvis was hanging out with his fans when I got there. Not THE Elvis, the man from Memphis, of course, nor Bubba from the True Blood/Sookie Stackhouse series (if you’re a fan, you know which character I mean), but Elvis Suissa, guitarist and singer of rockabilly/psychobilly band Three Bad Jacks. He’s seriously committed to meeting his fans before and after the show.

This new Elvis does remind me a little bit of The King. In the 1950s, kids swooned and fainted over Elvis; today teenage girls stare up into Elvis Suissa’s puppy dog eyes as he sings his most requested love song, “It’s Forever.”

The similarities don’t stop there. I received a range of responses when I asked people why they liked Three Bad Jacks so much and these quotes remind me of what fans used to say about the previous Elvis. Briyana and her friend Jessica liked “how the cute love songs sound like old school rockabilly;” Marina, Isabel and Jasmine told me that Elvis is a “total crowd-pleaser” and “his voice can do so many different things;” and Caesar Rodriguez (who has been a fan of Three Bad Jacks for 15 years, since he was 8 years old) and friends Eustacia and Brandy think the “band is awesome” partly because “the lyrics are so good, with so many different meanings.” Then there were all the girls who told me they love Three Bad Jacks because, well, “Elvis is hot.” So, I guess the two Elvises really do have quite a lot in common.

FIND OUT MORE ABOUT THE THREE BAD JACKS, THE DAISY PUSHERS, AND THE COPY CATS SHOW HERE

Posted by Kim Kattari at 8:56 PM No comments:

Minnie Mouse might get a tattoo - rockabilly and psychobilly day at Disneyland, November 14, 2009

Grease your hair back and put on your mouse ears. Join rockabilly and psychobilly fans for the second annual “Rock Around The Park” event at Disneyland tomorrow, Saturday November 14, 2009.

For the complete schedule click here
Posted by Kim Kattari at 2:13 PM No comments:

The Chop Tops, The Rocketz - their 'Helloween' shows were a success; see them this weekend in So Cal 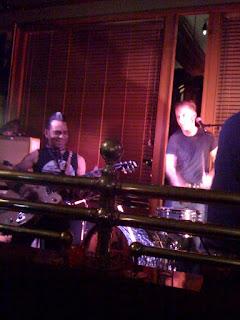 Really? A psychobilly show in Menlo Park? Nestled among the oak trees of dot com surburbia, The British Banker’s Club

is clearly one of the only places to go if you’re a bit too alternative for the Stanford party scene. The architecture and décor of the place is really interesting. Over a hundred years old, this spacious saloon has been a bank, a city hall, a police station/jail, and a public library (there’s a bookshelf of law books on the upper floor you can browse through). The downstairs bar features real Tiffany stained glass windows and lamps, and the upstairs bar was brought over from England, so the bartender told me. So even though I had my doubts about seeing a psychobilly show in Silicon Valley, I was pleasantly surprised with the venue.

On Thursday October 29, The British Banker’s Club kicked off the first of a three-night series of Hell-O-Ween shows, headlined by The Chop Tops and featuring a diverse line-up of other California bands: Death Valley Drifters, The Strikers, No Dice, and The Rocketz.

Every one of these bands has upcoming shows this weekend, November 13-15 (check out the bottom of the article for listings).

Posted by Kim Kattari at 9:12 AM No comments:

Bettie Page: Not the girl next door

“I was never the girl next door,” said Bettie Page. The famous pin-up model from the 1950s, who passed away in December 2008, had a tremendous impact on women, and on men’s ideas about women, throughout the decades. But nowhere is Bettie Page more adored than within the psychobilly subculture.

Psychobilly women who adopt Bettie Page’s look don’t want to be the girls next door either. They portray an overt feminine sexuality that seems at first glance to be directed towards pleasing the male gaze. They like looking good and enjoy being looked at. They spend hours before a show getting “dolled up” in anticipation of being on display that night. The men in the psychobilly subculture frequently tell me how much they enjoy the fact that women put so much effort into looking sexy.

But are psychobilly girls reproducing the sexual objectification of women by catering to male desire, or is there an active construction of alternative gender roles taking place here in which pin-up girl sexuality represents an empowered feminine identity? I want to consider the way psychobilly women who amp up their femininity cleverly navigate a fine line between being objectified and harnessing their sexuality out of their own intentions.

The melody rings out from the guitar, the slap of the bass kicks in, the drums hammer away, and suddenly you’re tapping your foot and bopping your head to some of the fastest rockabilly you’ve heard.

And one thing’s for sure – you can always count on Three Bad Jacks to take it up even one more notch. At The Blank Club in San Jose last Friday, lead guitarist and singer Elvis frequently spurred the trio to faster and faster speeds, giving fans a real treat. In fact, the bassist was playing so fast that his hand was simply a blur in the air.

Read more of this article...

Watch Three Bad Jacks' video for "Crazy in the Head."